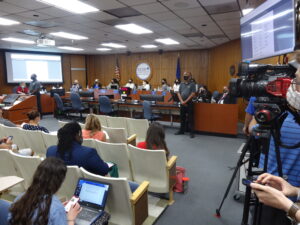 Republican Stray Cats’ epic failure to work together to win CCSD races costs Repubs major opportunities to start fixing education in Nevada at the ballot box this year. After several Republicans ran in the same Clark County School District races the libs won. What’s extremely frustrating is that the total number of votes for the Republicans outnumbered the Libs for school board. Republicans fail because they lack order and discipline.

If one combines Jay Calhoun and Erica Neely’s votes in District “F” they beat the Dems with a total of 7,055 votes to Irene Bustamnte’s 5,675 or Danielle Ford’s 4,6688 votes.

BTW Irene Bustamnte is a full blown Socialist Democrat. Far more radical than Danielle Ford who was the sole voted against the vaccine mandates for School employees.

The writing is on the wall. We cannot rely on government run schools to educate our kids with our values and prepare them to compete in the world. We must take ownership of our kids and educate them either at home, or create new schools for them with new alternative funding mechanisms.