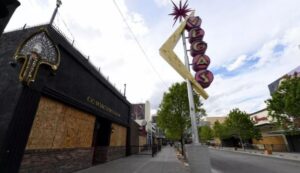 On July 10, 2020, out of the blue, with only 1 day notice, Gov. Sisolak shutdown all bars and taverns in most of the state over false allegations of mask noncompliance. False, because not one bar or Tavern was on a public list of businesses cited for mask non-compliance by health officials. Last Thursday, Sisolak issued bars and taverns 24 hour notice to close by Friday at midnight.

A group of about 60 bars and tavern owners, including some of the biggest companies in the state, joined a lawsuit tavern complaint  represented by the Bailey and Kennedy Law firm. Attorney Dennis Kennedy representing the group of 60 bars and Taverns wrote in the complaint “The disparate treatment of bars and taverns is unreasonable because there is no rational basis for treating bars and taverns differently than other, similarly situated, non essential businesses. There is no evidence that sitting at a bar top or at a table within a bar area increases the likelihood of contracting COVID19”

This week, Judge Earley heard arguments from both sides. The hearing, which was originally scheduled for last week, was continued after Gov. Sisolak announced his latest plan to shut down only some businesses.  The judge asked for the Government’s new plan and how it would impact Taverns affected by his shut down order from July under his old plan.

Judge Early ruled the Governor can do what ever the hell he wants.

Dennis Kennedy, Attorney for 62 Taverns and Bars, said the “Governor’s order has put thousands of people are out of work.” he went on to say “None of the Taverns were ever cited for being out of compliance.” NV OSHA stated that Taverns and Casinos were both in compliance of 80% and at 89% in the 2nd round of inspections.” “Clark County Department of Business Licenses issued zero notices of violations against some 1,000 Taverns.” “The Governor has a duty to address his own directives as he moves forward by evaluating their effects.”