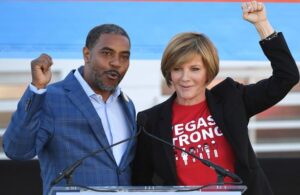 * Fighting inflation, strengthening our supply chain, and lowering costs from groceries to gas

* Protecting a woman’s right to choose and codifying Roe v. Wade into law

Democrats talk tough on gun violence yet their big city DA’s like in LA refuse to prosecute convicted felons in possession of guns or criminals who commit crimes with guns. There are 300 million guns in America. The real issue they refuse to talk about is, over-medicated kids, Godless schools and no one teaching them to actually value themselves.

Dems control the House, the U.S. Senate and the White House. They could have done all these things for the past 2 years. But every one of their stated policy goals has cost Nevadans jobs and hurt middle class families already. Inflation is a direct result of their war on oil and natural gas. Dems are purposely pushing gas prices up to force folks into electric cars. Putin didn’t shut down the Keystone pipeline, block oil exploration on federal lands in the U.S. or blocked fracking.

Roe v Wade is an election year scam to trick low information voters into forgetting about Dems forcing you to get vaccines and locking you down for a virus with a .006% fatality rate. No one is taking away your right to kill your unborn baby.

Climate change is their biggest scariest scam yet. Did you know that under the ice on Green Land there used to be Viking farms? The Earth has been really hot and really cold over the last 2 billion years. Drilling holes in the Earth to get Lithium is not sustainable and will lead to worldwide poverty.

The fact is we don’t have a water supply crisis. California stole our water and refuses to build water storage facilities, desalination plants and recycle their urban water supply. Clark County recycles 100% of all its sewer water. California recycles 23%. If they just recycled their water like we do there wouldn’t be a problem. Israel has green grass and trees because they use technology. But Dems want the water crisis to control us.

Dems turned our health care system into a welfare system run by the DMV. When you pay your premium you’re paying for 2 other people. The American people can’t afford the affordable care act anymore.

Everything the Dems do is meant to make folks poorer, more depended and give government more power over our lives. Higher gas prices, inflation, higher healthcare premiums, less homes built to save water, all makes poorer and less free. California is Dems’ model to remake America where the average person cannot afford to buy a shit box in Watts, pays more for gas, pays a $2k for one bedroom in a 2 bedroom apartment all whiling paying more income taxes, sales taxes and gas taxes.

If you want to turn American into California by all means vote Democrat this year. Otherwise vote for April Becker, Sam Peters and Mark Robertson.