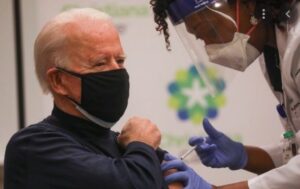 This 4th of July was the deadline for Biden’s CV19 VAX program goal of 70% jabs. They failed to hit that. About 55% of the country so far has refused the jab. Until now, the Pfizer and Moderna vaccines have been operating on an emergency waiver pending full final approval of the experimental never used mRNA VAX. But as the controversial FDA advisory panel is set to give full approval to the vaccines Biden and Dems across the country are set to pass laws mandating CV19 vaccines. Dr. Fauci claims the country needs much higher VAX rates to achieve “Heard Immunity”. Some have been pushing conspiracy theories that unvaccinated folks are causing mutation CV19 variants. But even 55% of Fauci’s own staff have refused the jab.

And before you say my body, my choice, our newest Supreme Court Injustice, Amy Barrett, has already ruled in favor of “compulsory vaccination laws”.