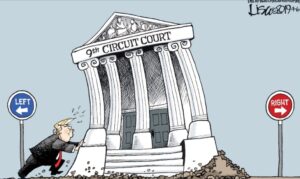 This week, the extremely liberal 9th Circuit of Appeals actually ruled in favor of the 2nd Amendment and against the State of California when they struck down a California law banning gun magazines with more than 10 rounds. But if you’ve following President Trump and the U.S. Senate’s efforts to transform the 9th “Circus”, as many jokingly called in the past, then you may not have been surprised this week at all.

Since taking office on 2019, President Trump has replaced a wopping 8 Judges on the Appeals Court out of 24 sitting judges, so far. Before Trump took office, the 9th Circuit was the most overturned court in the country. Many have called for its break up since its case load and power have grown expeditiously since its inception. But instead of slicing up the 9th Circuit, President Trump and Senate Majority Leader Mitch McConnell have worked to rebuild the 9th Circuit, along with the rest of the court system.

Without the courts to back the Democrats’ wild gun laws and other assaults on Constitutional rights, their plans to remake America will be dead in its tracks. Trump’s success as shown by the 9th Circuit’s ruling is why the Dems are so desperate to get rid of him this November. And its why its so important to reelect Pres. Trump and Real Republicans to the house and Senate this fall.