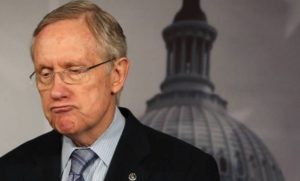 Senate Minority Leader Harry Reid of Nevada blocked a Republican bill in the Senate to fund the$179 Billion VA in an effort to force Republicans to pass a different bill funding IRS agents.

“We sit here in a partisan gridlock manufactured by the other side over issues that it’s pretty hard for the general public to understand,” said Senate Majority Leader Mitch McConnell, R-Ky.

Sen. Reid said “It wouldn’t be truly an emergency funding,” said Senate Minority Leader Harry Reid, D-Nev., “Go ahead, let’s whack Obamacare, Ebola money, veterans, Planned Parenthood … I can’t imagine how anyone would have the audacity to come to the floor and talk about what a great piece of legislation this is.”