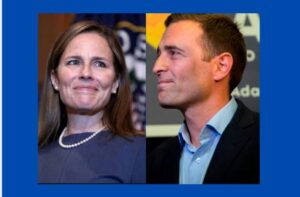 Unfortunately Presidents need to rely on folks around them to help recommend and vet candidates for positions like Supreme Court Justice and now Republican candidate for U.S. Senate for Nevada. Even though we all may support many of Trump’s policies and successes, when he makes a mistake we must help make it right.

On Sept. 28, 2020, I wrote an article calling on Pres. Trump to revoke his nomination of Amy Barrett after reviewing her disastrous Judaical record. Her record consisting of voting for endless lock downs and vaccine mandates alarmed me. I warned everyone she was a danger to our liberties. Unfortunately I was proven right by her voted against the President’s election fraud lawsuit, Obamacare, and now, as a Justice on the Supreme Court she supported vaccine mandates by a University.

President Trump again relying on the wrong folks, endorsed Adam Laxalt this week. Actions speak louder than words. Laxalt is the definition of a RINO. After all Laxalt tapped Tax Hike Mike Roberson as his Lt. Governor. But worse he’s an entitled emptied suit who’s failed to stand up for Nevadans and for our cause.

Laxalt on 2A. The only good thing he did as Nevada Attorney General was block the Bloomberg gun background check law from going into effect. But after Laxalt left office did he stand up for our 2A rights? Did Laxalt fight the back ground check law and red flag law? No. Did Laxalt stand up and sue Sisolak over endless lock downs? No. What has he done to help clean up our voting system since last year? Nothing. In fact Laxalt’s AG’s office full supported and endorsed Red Flags laws in a published report. https://360newslasvegas.com/laxalt-does-180-on-gun-confiscation-red-flag-laws-in-new-ag-report/

Laxalt on Biden impeachment. And now that Laxalt is running for the U.S. Senate he refuses to call for Biden impeachment. Laxalt is an empty suit who refused to answer questions even from fellow Republicans when he ran for governor. He turned out to be one of the worst candidates ever to run. Even Sandoval was a far better “candidate”.

Laxalt is all in for open borders. On April 15, 2020 Adam Laxalt announced he was joining the #1 Illegal Alien supported organization and Champion in the U.S. Catholic Charities. In 2018, Catholic Charities received more than $1.6 billion from the Feds to house and feed illegal aliens. Last year President Trump reduced their funding as he tried to tighten illegal alien rules throughout the U.S. which explains why Catholic Charities invited Adam Laxalt to join their board of Directors. The organization retained Laxalt to because of his access to the Trump administration, seeking to increase Fed funding for the Non-profit group in support of their work with illegal aliens entering the US. https://360newslasvegas.com/laxalt-joins-catholic-charities-1-illegal-alien-open-borders-group/

Vaccine Mandates. Laxalt is a lawyer, but what’s worse is he’s taken tons of cash from pharma companies, including Pfizer. So don’t expect him to stand up against VAX mandates anytime soon.

Where has Laxalt been for the last 3 years? He’s done nothing to help us here in Nevada. Laxalt’s nomination ensures Cortez Masto will be reelected and the Senate will remain in Dems’ hands. Our country faces the most dire internal threat from Dems ever. We need real freedom fighters, not squishy RINO’s who refused to stand up for us at our most desperate moment.