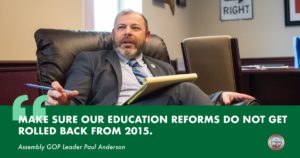 With just a few days left in the 2017 legislative session, in Carson City last night the Assembly Ways and Means Committee and the Senate Finance Committee held a joint session to hear amendments to the Education Saving Account (ESA) bill Democrats might support. Democrats want a means test for wealthy Nevadans limiting their tax credits for sending their kids to private schools. While Republicans say that’s a deal killer.

In September 2016, the Nevada Supreme Court ruled Education Saving Accounts (ESA’S) were Constitutional and could move forward in the state, but their funding source at the time was unlawful. So, in October of last year, in the special session, Governor Sandoval, Senator Roberson and, then, Majority Leader Anderson all promised Republicans if they voted for taxes for more Cops, more money for the Las Vegas Convention Center and for the Raider’s Stadium room tax, they would deliver ESA’s in this year’s legislative session.

Earlier in the month Governor Sandoval and Republican Minority Leader Paul Anderson threatened to veto every Democrat bill if they refuse to pass ESA’s. Well that lasted about a Hollywood minute before Anderson and the Governor folded.

Many Nevada Hispanic groups support ESA’s and so there’s huge pressure on Democrats to pass some kind of ESA bill.

Anderson holds a one or two vote majority in the Republican Assembly Caucus which will certainly evaporate if he fails to deliver on ESA’s this session.

With less than a week to go in the 2017 legislative session, the countdown to political Armageddon for Gov. Sandoval, Senator Roberson and Minority Leader Anderson is looming with all eyes on them.