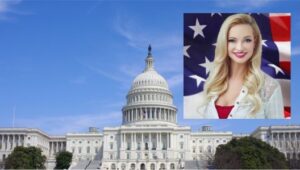 Today, the FBI interviewed former Congressional Candidate for Nevada District #3 and social media firebrand, Mindy Robinson for being outside the Capitol on Jan 6th, during the riots.

According to Mindy, the FBI were waiting for her at her home in Nevada as she arrived this afternoon. They asked her questions about pictures on Instagram of herself outside the U.S. Capitol on Jan 6th, 2021.

Over 400 people have been charged by the Department of Justice since the Jan 6th riots.

The FBI had no comment when we reached for more information.