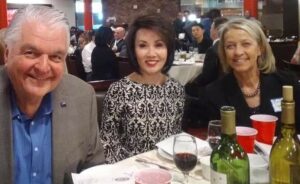 711 Lady, Nevada Secretary of State Barbara Cegavske is investigating allegations that the co-founder of MedMen made illegal campaign contributions to Gov. Steve Sisolak, after POLITICO reported the claims. Cegavske says she is “reviewing” allegations exposed in a lawsuit against the company by its former CFO James Parker.

Parker alleges that MedMen co-founder Adam Bierman maxed out donations to Gov. Sisolak and compelled other executives at the company to make the additional contributions that he had promised to the Sisolak. Parker alleges that Bierman purchased furniture for co-founder Andrew Modlin to offset “a sizable donation.”

Medmen Las Vegas at Paradise & Harmon is just off the Vegas Strip, and is the closest marijuana dispensary to UNLV, and the Hard Rock Hotel Las Vegas. Sisolak allowed Medman to remain open throughout the Corona Virus shutdown and even allowed them to deliver weed waiving established rules for dispensaries.