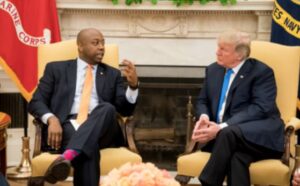 After Democrats filibustered (R-SC) Sen. Tim Scott’s Police Reform bill, his office was flooded with calls. In an interview with Fox News’ Martha MacCallum, the Senator described many of those calling attacking him with the “N” word.

“We had more than a dozen of them, I only played two of them, which were the most racially offensive comments from liberals in this country that called to say that I was in their crosshairs It was so profanity-laced, you can’t play five seconds of those videos on your show because there’s that many F-bombs, the N-word, by liberal Democrats causing a stir in my office and threatening my life. It is the most audacious, repugnant behavior I’ve seen in a very long time,” Scott said.