WHEN A TYRANT SAYS OVER & OVER HE WANTS TO KILL US WHEN DO WE SAY ENOUGH?

WHEN A TYRANT SAYS OVER & OVER HE WANTS TO KILL US WHEN DO WE SAY ENOUGH? 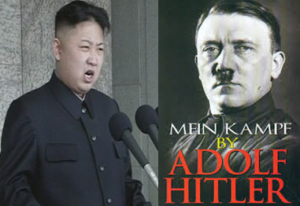 Opinion- With the entire US Senate scheduled to meet in the White House today to hear a briefing about the threat posed by North Korea its important to asked the fundamental question; when do we take death threats from a hostile nation seriously, who is working feveriously building nuclear weapons? Since the early nineties, North Korea has been threatening to wipe the US mainland off the map. President Clinton tried to make a grand deal with North Korea which was supposed to prevented them from building nuclear weapons in return cash and food aid. The deal failed and today we have a nuclear armed North Korea trying to build long range nuclear tipped missiles capable of hitting the US continuously threatening to kill us.

At what point does the US say enough? At what point do we believe North Korea and take action to stop them, including pre-emptive force?  The world supposedly learned that lesson after World War II, after Hitler wrote Mein Kampf (German, “My Struggle”). In Mein Kampf, Hitler talked about “a period of conflict” which will be necessary for the superior German race to not just conquer but subjugate or destroy inferior races in order to build a superior society. Because just teaching someone German does not make them German, in the end that just makes German weaker by infecting it with inferior subhuman races. In other words, kill all the inferior races. In 1938 the world knew what Hitler was all about but because England was weak militarily, they cut a deal with Hitler. Just as Bill Clinton did after gutting the US military cut a deal with North Korea in the 90’s.

But today the US is the most powerful nation on Earth. Should the US choose to unleash that power to protect the innocent people of South Korea, Japan and our own people here at home from the threats of a nation desperately working to build nuclear weapons capable of wiping us all out? Do we take such a nation and their constant threats seriously? Or do we wait and see what happens?

But there are not good military options for us. If we strike North Korea we risk losing a million people in South Korea, Japan and innocent civilians in North Korea. But that’s better than losing 10 million Americans in five to ten years when North Korea has missiles capable of hitting a dozen US cities.

Our current predicament with North Korea is a window into a future with a nuclear armed Iran. We need to re-negotiate that deal as Trump has said and perhaps if Trump shows a willingness to use force in North Korea, Iran will fall in line. The truth that liberals refuse to accept is that the world for the past 5,000 years has been governed by the aggressive use of force. Over the past 5,000 years there have been 14,500 wars and over 2 billion people killed. The lesson we must learn from human history is; after all the pandering deals are cut and all the concessions are given out to tyrants, in the end tyrants who threaten us must be disposed of through force.