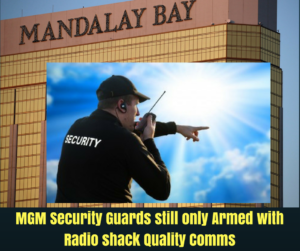 When the Mandalay Bay Hotel was used to commit the largest mass shooting in U.S. history, one unarmed guard, Jesus Campos, was the Hotel’s entire response.  Jesus Campos, who wasn’t even a licensed security guard in the State of Nevada, reportedly called in the attack to the Mandalay Bay Security Office on Radio Shack quality comms.

According to sources inside MGM security, MGM does not allow its security guards to carry firearms. And even after the Vegas Shooting Attack, they still only have unarmed security positions available on their website.

The MGM owns the following hotels on the strip:

According to Las Vegas Lawyer Robert Eglet, MGM’s hiring of unarmed security guards may be a factor in any future lawsuits filed by victims’ families. It goes to whether MGM did everything in its’ power to responsibly prepare and respond to a shooting.