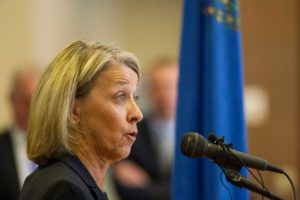 NEWSMAX TV LAS VEGAS learned this week, according to well placed sources, Republican Nevada Secretary of State Barbara Cegavske opened a criminal probe. No she didn’t open a probe into the recent news story regarding 9,200 returned letters from active voters listing vacant lots as home addresses or Willie Nelson or James Bond registered as active voters in Nevada Assembly 15. No she didn’t open a probe into Democrats using illegal aliens and felons to register new voters. No she’s not looking into all the Nevadans who reported showing up to the polls to vote only to be told they had already voted and were given a provisional ballot. No, our Republican Secretary of State this week opened a criminal investigation into the Republican State Party and whether low level workers failed to turn in voter registration forms for Democrats who Republicans registered.

In 2015, Cegavske failed to get voter Id passed with a Republican Governor, a Republican State Senate and a Republican controlled Assembly. Yesterday her office refused to investigate a Republican Assembly Candidate’s complaint filed on November 12, 2016 and just threw it away in the trash after lying to Mr. Vaughan in the email telling him his complaint would be “forwarded to the appropriate person for response.” Mr. Vaughan received back from the USPS 9,200 letters he had mailed out to active voters. More than a third had a vacant lot listed as the address. Mr. Vaughan even found the Las Vegas Review Journal registered to vote, yes a corporation.

“The claim of “9000 USPS certified yellow label returns” was unclear.  There was no indication of what these returns were, or what mailing list was used to address them. “

By definition, if someone registers to vote and they list a vacant lot as their home address, signed under penalty of perjury, they committed a crime. Now, I am not claiming any of Mr. Vaughan’s materials and statements he has provided should result in a criminal charges or not. I certainly do not have the resources to investigate 9,200 returned letters from the post office. But it is the job of Nevada Secretary of State Barbara Cegavske to investigate complaints filed by candidates and the public. In her response above, she states “The claim of 9000 USPS certified yellow label returns was unclear.”  Unclear? Shouldn’t she investigate the matter to clear it up? Shouldn’t she have a tiny bit of curiosity? Shouldn’t she at least investigate and prove Mr. Vaughan is a dip sh*t, if that’s what she thinks? 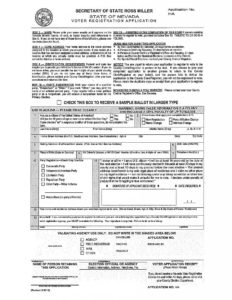 After failing to investigate serious allegations of voter fraud in Nevada, according to sources, the Feds have stepped into investigate Mr. Vaughan’s claims. Republican Secretary Barbara Cegavske must be confused. Under the Nevada Constitution, the Nevada Secretary of State is a partisan position, like the Governor, like assemblymen, like State Senators. she ran on a political platform supported and funded by Republicans. Her job is to further the political and policy objectives of those who elected her just like the Govenor. Not only has Nevada Secretary of State Barbara Cegavske lost my confidence, she has lost my vote. I am calling for someone to step forward and run against her in the Republican primary next year. I want someone who will do their job and investigate all alleged voter fraud thoroughly. I want someone that won’t throw Candidates’ complaints in the trash.