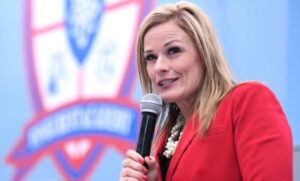 After paying Mike Roberson some $260K, Carrie Buck thought her election to the Clark County Chair was a slam dunk tomorrow. Her folks, led by Ed Gonzales, a teacher’s union lobbyist, dumped every loyal Pro-Trump Clark County Republican Member who opposes Carrie Buck over the weekend before their fake Aug 17th ZOOM election.

But, right below the Judges’ signature, she writes “The regular scheduled meeting of August 17th shall be stayed until both parties can be heard by the court.”

As of this morning Judge Jessica Peterson is off the case. So there won’t be a hearing this afternoon as they hoped. Instead a new judge will be appointed in the coming days. Meaning the Aug 17th meeting is cancelled per the TRO.

Clark County Republican Chairman Jesse Law filed a motion to transfer the case to business court this morning. In addition, over the weekend the NVGOP officially certified Jesse Law and his Pro-Trump slate as the official leadership of the County Party. 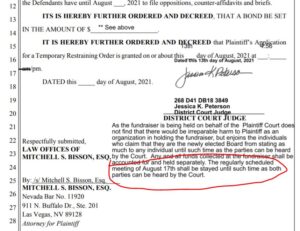 The entire TRO and complaint filed: