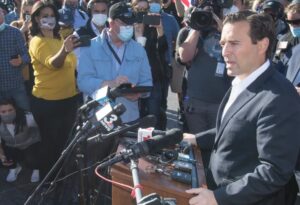 Following the November 2020 Presidential election, the NVGOP and the Trump campaign team explored many options to file lawsuits challenging the results in the Nevada general elections. Former Nevada Attorney General Adam Laxalt was front and center in the news cycle “fighting” for President Trump. But behind the scenes Laxalt was anything but cooperative.

Adam Laxalt filed a lawsuit on behalf of several plaintiffs in an effort to help Pres. Trump. The suit named Secretary of State as the defendant and sought to disqualify votes from non-citizens listed as registered voters.

Laxalt never disclosed his conflict of interest between Dominion and the Trump campaign team while representing them in the lawsuit according to sources we spoke with.

In addition, 360 News reached to Laxalt’s Washington D.C. Law firm where he works, to confirm whether they also represented Dominion Voting. They refused to answer.