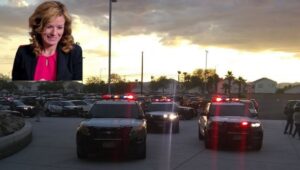 On Tuesday night, the Clark County Republican Party held its leadership election meeting. NV State Senator Carrie Buck was running for the Chair of the Clark County Repub Party (CCRP) against Trump Endorsed Candidate, Jesse Law. But, in the middle of the night, the day before the election, Jesse Law was removed from the ballot. But, still, hundreds of Trump supporters showed up to vote anyways. Not sure if Dave Sadjak planned to have only 1 old lady signing in hundreds of new members outside in 109 degree heat or if it was his usual incompetence.

At 7pm, when it was clear the Trump supporters were not going to be allowed in, they peacefully chanted “Let us in”. After about 3 minutes folks were done. About 30 minutes later, while quietly sitting around outside in the courtyard, some 20 metro cops showed up and informed the folks they were trespassing and had to leave. I watched the entire drama play out and, frankly, I was confused why 20 metro cops showed up to escort out some 40 seniors citizens off public school property? Not exactly an Antifa riot? So I did some digging. According to my police sources, Sen. Buck or her husband, Police Captain Buck, called and exaggerated the threat level, triggering the massive police response.

Here is Sen. Buck’s tweet the next day claiming “They stormed the doors & Destroyed school property. Vile Creatures will not be tolerated”

NVGOP Chairman Michael McDonald responded to Bucks comments “This is a clear indication that Buck is no leader, by calling Republicans vile creatures. I spoke with the LVMPD and Clark County School Police who told me there was no damage, zero to the school property.”

Was the tweet after the fact an effort to defend her actions calling the cops, or was it an effort to paint her main opponent for Party Chair, Jesse Law, as a dangerous threat to the party? What is clear, is the cops were called after it was obvious that Buck was about to lose the election for Party Chair. BTW after the cops arrived, the election was suspended. Buck’s tweet resembles Nancy Pelosi’s Jan 6th lies more that the Republican leader of Nevada’s largest county.