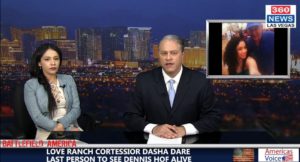 About a week ago, 360 interviewed Dasha Dare in studio, a Brothel worker at Dennis Hof’s Love Ranch who was the last person to see Dennis Hof alive, in which she claimed Zack Hames, Dennis’ personal assistant, appointment secretary and driver, gave her a drink from a cannabis dispensary to give him before he went to sleep the night he passed away.

On Monday night, I spoke with Mr. Hames about Dasha’s statement. Zack vehemently denied giving Dasha any drinks to give Dennis. Zack went on then to accuser Dasha of killing Dennis, saying “Dasha said she would kill Dennis if he ever sleeps with another woman”.

According to Zack, his lawyer reached out to Nye County Sheriff Detectives and they requested he come in today for an interview to discuss the accusations made by Dasha. Mr. Hames issued 360 the following statement ” I am being interviewed by the Sheriff today in Pahrump.”

Dennis Hof died suddenly on October 16, 2018 and the Clark County Corner has yet to release any official cause of death nor toxicology reports. Hof won the General election on November 6, 2018 even though he died weeks earlier setting off a special appointment process.