THE ONLY GOOD REPUBLICAN IS A DEAD REPUBLICAN-WHY THE MEDIA LOVES PRES. BUSH

THE ONLY GOOD REPUBLICAN IS A DEAD REPUBLICAN-WHY THE MEDIA LOVES PRES. BUSH 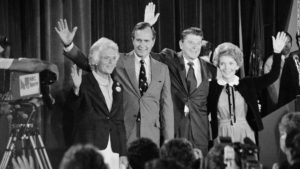 Watching the liberals in the news this weekend speak so highly of President George H.W.Bush and how they miss those days when he was President maybe the highest degree of hypocrisy I’ve witnesses in my life. For those of us who were around in 1992, like me, I cannot forget how awful the liberals and the news media at the time treated President George H.W. Bush. The Democrats in Congress used the special prosecutor to badger him his entire presidency on false allegations. Sound familiar?

The liberal press and the Democrats hated Bush while he was in office and attempted to smear his name every chance they got. Fox News was launched in 1996 so the only national media at the time was, The New York Times, The Washington Post, CNN and the big three, ABC, NBC and CBS. There was no internet, no Brietbart, no Facebook, just newspapers, the 6:00 news and CNN.

In 1992, I worked on President Bush’s reelection campaign and I was an up close first hand witness to how the liberal media worked. In 1992, after President George H.W. Bush just finished meeting with former President Regan to get his endorsement for reelection, I was in the motorcade with the President riding in the van in the back, with the media. I watched how they discussed the days events and all together decided how they all would describe President Reagan as look warm at the meeting with President Bush. I saw how they made up the news and all three news outlets were on the same page pumping out their fake news.

For the entire four years of President Bush’s tenure, the Democrats and liberals in the press hounded him with Congressional investigations and a special prosecutor. In the end President Bush pardoned everyone involved in the Iran Contra affair after losing reelection to Bill Clinton.

Here is a Story from 1992 in the new York Times

During President Bush’s years, the Savings and Loans collapsed causing a recession. Congress launched an investigation into the Savings and Loans collapse purposely dragging President Bush’s son, Neal Bush, before a Congressional Committee and yelling at him and accusing him of crimes with the camera all there. But that was just the beginning. For the final two years of President Bush’s years in office, the news media convinced the public that the nation was in the worst recession in it’s history with daily news stories from every news outlet about how bad things were. The media actually talked the country into a worse recession just to help Bill Clinton defeat President Bush in 1992. Only after President Clinton won did the press start writing positive news stories about the economy.

The Democrats in Congress investigated President Bush based on a conspiratorial rumor that he flew over to Iran in a super secret spy plane to convince the leaders of Iran not to release the hostages in 1980 in order to help Reagan win the election. There was zero evidence but they investigated President Bush just to hurt him. And then like now, it was the Democrats in Congress conspiring with the Liberal News outlets to slander him.

Look how the liberals in the news treated George W.Bush throughout his years in the White House and now they love him. And of course John McCain was treated horribly after he won the Republican nomination for President in 2008, but back in August of this year when he died they declared him a new American Saint.

Today’s news coverage by the liberals of President H.W. Bush is nothing more than an attempt to knife President Trump. The media is using the President’s death to drive a wedge between the Bush moderate wing of the party and the Trump side of the Republican Party.  So when the liberal national news keep saying how it was a different time back then when there was decency and respect in the nation’s political discard remember they treated President H.W. Bush, just as badly as they are treating President Trump today. The only difference now is, President Trump fights back just as hard. Democrats have proven this week with their fake tears for President Bush that they only like Republicans who are out of office or dead.