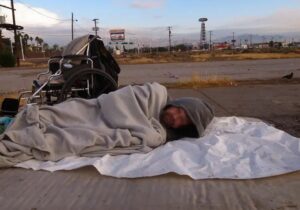 Many folks think feeding the homeless on Thanksgiving makes them good, righteous people. After they spend a few hours serving mashed potatoes and gravy to the great unwashed, they don’t feel bad about going home to gorge on turkey dinner. They did their duty, and now they don’t have to worry about the homeless for another 365 days.

I tried to do something more this year. The day before Thanksgiving, I came across a homeless person sitting on a curb in the parking lot I just pulled into. I notice the person on the ground with their suitcases encircling them. Let’s call her Mary. Mary was around 40 years old, clean, with good teeth, no needle marks on her arms, no signs of drug abuse or intoxication, but she was a bit dirty. I asked her what happened. She told me her story, and I wasn’t sure what to believe. But I did get the sense she was just stuck in her current situation without any idea how to get out of it.

Mary was like a puppy dog abandoned on the street, left to fend for herself. That same day, I closed on a huge business deal, possibly the biggest of my life. So I felt grateful for my good fortune and decided to help this poor soul to the degree I could.

I spent the rest of the day with Mary, getting her a real meal, and listening to her. She recently lost her dad, which seemed to have triggered her current situation. Her mom died years early, leaving her helpless. She was childlike. According to her, other homeless people stole her bag with clothes and her ID. Mary quickly realized she was stuck without an ID. With no address to order a new one, the DMV only accepts online appointments and has no transportation. Mary could not figure out how to get out of her current status. I asked her what kind of job she wanted. She had no clue. Clearly, her family cared for her, and without her dad, she was on her own for the first time in her life.

I had plans to go to LA for Thanksgiving the next day, so I rented her a motel room for a couple of days and gave her cash to eat and buy clothes. But I assume that after her brief reprieve, she’s back on the streets. She had a cell phone, which I tried to call to check in on her. But there was no answer.

I did learn a great deal from her. When a person crosses that line from living inside to sleeping outside on a curb, they change. They’ve now accepted homelessness. I came to see homelessness itself a psychological disorder. It’s a mental trap that people get stuck in.

The definition of a psychological disorder is:

A psychological disorder is, broadly speaking, a condition characterized by distressing, impairing, and/or atypical thoughts, feelings, and behaviors.

We hire dog catchers to scoop up dogs and bring them to a shelter, where we feed and house them against their will. They cannot leave until they are adopted by a family. Again, the homeless I’ve seen and met are no different.

If a person commits a crime and is found to be mentally incompetent, they cannot be prosecuted. Instead, they are sent to a mental facility. Allowing thousands of mentally ill people, drug addicts, and people like Mary, who are lost souls, to roam our streets is neither merciful nor humane. While locking them up in a shelter may sound cruel, it is far safer and more humane than letting them sit in a box in their own filth.

If your teenager was on drugs and out of control, you would send them to a rehab center, yes, against their will, for their own good. The homeless don’t possible know what’s best for them in their current state. They need to be housed and treated. Many require long-term treatment to recover from the psychological effects of homelessness.They need counseling and to be given a job to perform, perhaps at the treatment center or another nonprofit.

Politicians tell us its a complex issue. While the causes of homelessness are complex, the immediate solution is very simple. We need police to scoop them up, we need lock-down shelters to hold them where they will be fed three meals a day, and provided professional, long term psychological care. This is not welfare, this is caring for people like Mary in desperate need of life-changing help.