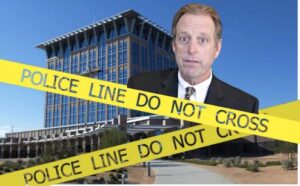 9 Shot, 2 dead on the 4th of July, sounds like headlines from Chicago or Detroit, but its Mayor John Lee’s North Las Vegas, the Murder capital of Nevada. When lee took office in 2013 there were 7 murders in the North Las Vegas. After he defunded the police by $100 million the murder rate spiked 500%. According to Public records request from NLVPD, in 2021 as of today, there have been 14 murders year to date.

Mayor Lee switched from Democrat to Republican in April and now seeks the Republican nomination for Governor. One might think given the horrific crime stats in North Las Vegas Lee would crack down on criminals. But Mayor John Lee continues his soft on criminals Liberal Democrat approach, even show casing his criminal justice reforms in the news the last couple of months.

Last weekend, Mayor John Lee’s North Las Vegas City bragged about their modern approach to crime fighting and compassion for criminals. The City hosted a warrant quashing event giving all kinds of folks a get out of jail free ticket. Felonies, misdemeanors, traffic. Anyone who cried a river got a lucky break last weekend. 360 News interviewed Judge Harris who took her Saturday to quash warrants for folks. The only problem was, no victims` advocates or prosecutors were there to push back. And this program has been going on for the last 3 years at least.

Crime fighting history has proven that when police focus on the smaller crimes they always reduce the bigger crimes, because murders don’t think twice about breaking all the laws. Often police catch bad guys committing minor offences. But this requires more police. After Lee took office he cut the number of police. Everyone supports giving folks a 2nd chance, just not a 4th, 5th and 6th.

The shiny new marble brimming nine story N. Las Vegas City Hall has views for miles. Mayor Lee can view the carnage and vacant shopping centers that dot the landscape along Las Vegas Blvd today. The N. Las Vegas City Hall, a modern castle, surrounded by low income housing, cost about $130 million to build. There are marble floors and granite tabletops, solar panels and flat screen TVs throughout and even an outdoor concert plaza. The City Hall was built to house 1,500 bureaucrats. In 2013, N. Las Vegas was facing a $15.5 million budget gap and a junk bond rating on Wall Street. The city was also facing bankruptcy and State receivership.

Instead of selling the City Hall building, and or selling off the old police Headquarters, the old city hall, other city land, buildings and a housing development the city actually built but never finished, Mayor Lee elected to defund the Police and keep the city jail closed (for next 7 years) in an effort to save the city hall building from receivership. Lee refused for years to lease huge empty swaths of the 9 story building to the public. He eventually leased some space in the new City Hall to other government agencies. The marble castle sucked up huge amounts of the city’s capital for the following years at the expense of public safety. Only recently, in 2020, as Lee was planning to run for Governor as a Republican, did he reopen the city’s jail.