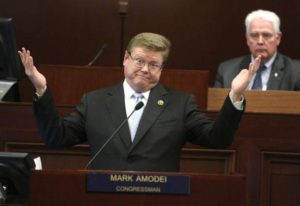 We have decided to publish Amodei’s public comments only.

“Using government agencies to, if it’s proven, to put your finger on the scale of an election, I don’t think that’s right,” he continued. “If it turns out that it’s something along those lines, then there’s a problem.”

“I stressed my complete agreement with Senator Cortez-Masto’s (D-NV) statement reported to KTVN Channel 2 from yesterday which is as follows:”

‘I think from all of that information, we have to follow the facts and figure out what happened here,’ Cortez-Masto said.

“I think that’s why we have the committee process,” he added. “I won’t attribute what was in the president’s mind. That wasn’t a great way to express concern about it. Part of what the committees will do is try to find some context for that and then based on what a fair reading of the context is, they’ll go forward from there.”

“The president’s challenge in the campaign will be…to get some messaging through on what they’ve accomplished,” Amodei said, …amid an environment of fervent, “no-holds-barred” political “trench warfare between the parties and much of the media and the president.”