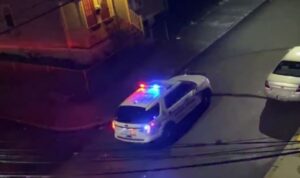 When North Las Vegas Democrat Mayor John Lee came into office in 2013, the city was in a $130 million hole due to the giant brand new City Hall they financed with bonds. Instead of selling the monstrosity, Dems defunded the police cutting the public safety budget by some $27 million, including closing the city jail.

The shiny new marble brimming nine story N. Las Vegas City Hall has views for miles. Mayor Lee can view the carnage and vacant shopping centers that dot the landscape along Las Vegas Blvd today. The N. Las Vegas City Hall, a modern castle, surrounded by low income housing, cost about $130 million to build. There are marble floors and granite tabletops, solar panels and flat screen TVs throughout and even an outdoor concert plaza. The City Hall was built to house 1,500 bureaucrats. In 2013, N. Las Vegas was facing a $15.5 million budget gap and a junk bond rating on Wall Street. The city was also facing bankruptcy and State receivership.

Instead of selling the City Hall building, and or selling off the old police Headquarters, the old city hall, other city land, buildings and a housing development the city actually built but never finished, Mayor Lee elected to defund the Police and keep the city jail closed (for next 7 years) in an effort to save the city hall building from receivership. Lee refused for years to lease huge empty swaths of the 9 story building to the public. He eventually leased some space in the new City Hall to other government agencies. The marble castle sucked up huge amounts of the city’s capital for the following years at the expense of public safety. Only recently, in 2020, as Lee was planning to run for Governor as a Republican, did he reopen the city’s jail.

According to several police we spoke with on condition of anonymity, when a North Las Vegas officer made an arrest he had to drive across town to the Las Vegas City Jail Center to process bad guys. “The city estimates officers lose about two hours every time they bring a suspect out of their jurisdiction for booking” 2020 Fox 5 News Story.

Donna Street Gangs, South American MS13 and Mexican street gang violence exploded making North Las Vegas the murder capital of Nevada. Certain streets in North Las Vegas were listed in the top ten most dangerous neighborhoods in America. The murder rate has doubled under Lee’s time in office. Lee appoints the Chief of police and sets police polices. Lee proudly appointed female minorities to leadership positions in the Police Department passing over far more experienced and capable white male officers, many of whom have since left the department following the snub.

According to several cops we spoke with, Gangs have targeted North Las Vegas cops creating “No Go Zones” at night due to their extreme danger. Cops were doubled up in squad cars as a precaution. One cop told 360 about going out on one call with two homicides on different sides of town, more than once.

And just this month, on May 9th, North Las Vegas suffered 2 murders in a single 24 hour period on opposite sides of town. First, a man was shot and killed in a trailer park Sunday Morning. Then at 9:25 pm Sunday night, a man sitting in his car in a parking lot was approached by two men and was shot and killed. North Las Vegas are currently investigating both homicides.

The average principle and debt service runs around $30 million per year.

The annual average budget for “Culture and Recreation” & “Community Support” was $40 million.