2021 THE YEAR THE CONSPIRACIES BECAME REALITY

2021 THE YEAR THE CONSPIRACIES BECAME REALITY 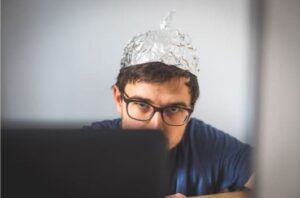 Big Tech blocks them. Big media scorns them. Big government spies on them labeling “them” conspiracy theorists. Anyone who dared to tell the truth was erased by big tech or “shadow banned”. Anyone who dared question the CDC, the NIH, the FDA, and “health experts” were deemed conspiracy theorists. Several far left Dems like Clark County Commissioner Justin Jones actually wrote and passed resolutions declaring “misinformation” a threat to public health. But in the end many of the conspiracies the left run media and big tech tried to conceal, turned out to be true.

Ever since the Kennedy Assassination, the media, working with the government, have labelled anyone who tries to push back against their official talking points about anything, is labelled a conspiracy theorist, especially when they have facts to back them up.

2021 saw the fall of historic conspiracies and exposed the government and media as collaborators in the ongoing pandemic.

1. Fauci funded the Wuhan Lab and CV19 research. From the beginning of the pandemic many folks in the Trump administration said Fauci had possibly funded the lab and research that led to the CV19 outbreak. Now more evidence has poured out showing his involvement and knowledge. In fact, the Intercept broke a story on Sept 21, 2021 with documents pointing towards such funding by Fauci’s NIH.

2. Masks don’t work and actually cause more harm than good. Even though Federal judges have refused to even allow an evidentiary hearing about the safety of masking 300K school kids 8 hours a day, even when they play outside, Fauci himself was caught writing in his own emails fabric masks do nothing to stop CV19 transmissions. The government of Germany published a study in the American Medical Association (JAMA) Pediatrics showing severe medical threats to public safety. Masks cause damage by increasing the levels of carbon dioxide by 3 fold in a new German peer reviewed study.

The study was peer reviewed by University of Witten/Herdecke’s ethics board. The study required each child to wear different masks for a total of 15 minutes, in contrast to the “several hours” they spend masked in school, the trial protocol said.

The authors tried out various masks, including KN95 respirators and surgical masks, on 45 healthy children ages 6-17 in southwest Germany. The room was “well ventilated several times” for each experiment, with CO2 content of ambient air kept under 0.1% by volume.

The first 3-minute measurement gauged “baseline” unmasked CO2 levels. The next 3-minute intervals were for CO2 content in “joint inhaled and exhaled air,” inhaled air only and exhaled air only. Two thousand parts per million of CO2, or 0.2%, is the limit for closed rooms under German law, the study said. The child with the lowest CO2 level was three times higher than this limit, while one 7-year-old was measured with 25,000 parts per million.

3. CV19 Vaccines are safe and effective

The CDC, to date, has failed to confirm a single death from any of the three CV19 vaccines or boosters, not one. The Vaccine Adverse Event Reporting System (VAERS) clearly states no such causation has been confirmed by the CDC for any of the 5,000 plus deaths reported. So we wanted to know how many deaths were caused by the vaccines, officially, according to the CDC. ZERO so far. The CDC’s spokesperson refused to issue any such number.

4. Unvaxxed are killing the vaccinated.

In a Freedom of Information Response from the CDC, filed by a New York Elizabeth Brehm, the CDC admits that it has no documentation of an unvaccinated CV19 recovered person spreading CV19.

The White House’s impetuous in creating Biden’s recent VAX rule requiring all workers in companies with more than 100 people must all be vaccinated seems to have just fallen apart.

5. The FDA cannot be trusted. The FDA would never lie to the public. But his 60 minutes episode from the 1970’s shows the FDA did this once before. As reported by David Hilzenrath is the Chief Investigative Reporter for the Project on Government Oversight.

Several members of a panel that will be advising the Food and Drug Administration (FDA) on whether to approve potential vaccines for coronavirus have a history of financial relationships with companies developing the vaccines.

6. The Media is Leftist media is lying about the pandemic.

MEDIA’S $5 BILLION PHARMA CONFLICT OF INTEREST? But many folks are asking whether the $5 Billion spent annually by drug makers on TV ads are a conflict of interest? Some are suggesting that the News Media should be required to disclose their conflicts of interest just as Wall Street executives have to when they appear on TV shows discussing stocks or investments.

7. PRC tests full of false positives. CDC PULLING CV19 PCR TESTS OFF MARKET ADMITTING THEY’RE UNRELIABLE. July 26, 2021, the CDC pulled emergency approval for the CV19 PCR tests admitting they confuse the Flu with CV19. These are the tests the media have been using to claim CV19 infection rates are on the rise.

8. The U.S. Government wants to set up internment camps. Direct from the CDC website.

The shielding approach aims to reduce the number of severe COVID-19 cases by limiting contact between individuals at higher risk of developing severe disease (“high-risk”) and the general population (“low-risk”). High-risk individuals would be temporarily relocated to safe or “green zones” established at the household,

The leftists running Australia have such camps operating right now.

9. The Government would never mandate the CV19 vaccine. Enough said.

10. QAnon is an American far-right political conspiracy theory and movement centered on false claims made by an anonymous individual or individuals, known by the name “Q”, that a cabal of Satanic,  cannibalistic pedophiles operate a global child sex trafficking ring.

11. Communists have taken over our public schools. As many folks took notice of the public schools and what they were teaching while distance learning they found out public schools were pushing far left American Communist ideologies like critical race theory, transgenderism and Anti-American themed history.

12. Joe Biden is a Chinese Asset. Biden lifted Trump’s ban on TikTok that’s allegedly spying on Americans. Biden abandoned Afghanistan in a historic humiliation giving our enemies the country and China a path forward for its Silk Highway. Now Biden is pushing to end the gas engine and make the U.S. dependent on electric cars powered by lithium controlled by China.

13. UFO’s. The U.S. Government, including the U.S military, admitted in the mainstream media that UFO’s do exist. 60 Minutes and Fox News did long form stories with detailed accounts from eye witnesses that said they saw UFO’s first hand.