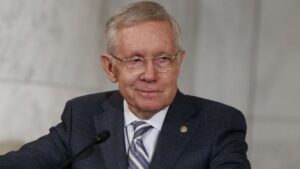 Peter Schweizer, president of the Government Accountability Institute and host of the Drill Down podcast, said on Thursday that former Senate Majority Leader Harry Reid (D-NV) enriched himself and his family by leveraging his political power.

Reid “enriched himself and his family,” Schweizer said on SiriusXM’s Breitbart News Daily with host Alex Marlow, “but you’ve got to give him credit. He had staying power. He had enemies in Washington, DC, but he always seems to overcome them and win.”

Schweizer recalled a quote from Susan McCue, Harry Reid’s former chief of staff, which he included in his 2013 book, Extortion: How Politicians Extract Your Money, Buy Votes, and Line Their Own Pockets. She said Reid was always assessing a person’s vulnerabilities in order to “disarm, to endear, to threaten, but most of all to instill fear.”

“The question is … if you’re really in private practice much at all over the course of 40 years and you’re serving in various government posts, how do you get this wealthy?” Schweizer asked, “and if you look at his career — that kind of a mobster, kind of scare people, use the leverage — played in.

Schweizer recalled an instance of Reid pushing an infrastructure project that increased the value of some property he owned.

He remarked, “In 2005, he’s a senator, he puts in an earmark to build a bridge in Bullhead City in Nevada for $18 million dollars — that’s taking our taxpayer money — this was to join Bullhead City with Arizona, to take it across the river joining Nevada and Arizona. The Arizona delegation said, ‘This is ridiculous. It’s not worth it. There’s another bridge further down the road. It’s not needed.’ But then, when you looked actually at Harry Reid’s holdings, you found out that he actually had a parcel of land right next to — or near — the bridge that was eventually built with taxpayer money. And the land that was valued at $400,000 before the bridge was worth $1.6 million after the bridge was built, and he profited.”

He stated, “The other part of [Reid’s] machine was his family — a big family — his sons Rory, Key, and Joshua were all lobbyists while he was a senator. His son-in-law, a guy named Steve Barringer, was also a lobbyist, and if you wanted anything done in Nevada — anything frankly, done in Washington, DC, — you were expected to hire one of his kids to effectively lobby his office. This was a very aggressive enterprise that was very profitable for the family.”

Reid evaded disclosure requirements for elected officials by enriching his children, Schweizer said. Reid “was very smart about setting up his kids,” he shared. “In other words, the flow of money from the interest was not directly to him in all these cases. A lot of times it would go to his kids, and the reason [is] you don’t have to disclose.”

Schweizer said after Reid was publicly criticized for becoming “very, very wealthy” through “land deals in Nevada,” Reid decided to set his children up as lobbyists to escape public disclosure regulations.

He continued. “Just to give one example, in 2011, a Chinese company called ENN wanted to build a $5 billion renewable energy facility in Nevada. Harry traveled to China to actually meet with the executives there. When he came back, executives of their U.S. affiliates started donating to his campaigns, to his PACs, [and] they hired his son Rory to a large fee to lobby and represent them.”

“Then there were reports that Harry Reid actually went to NV energy — which is the largest utility in Nevada — and was pressuring them to sign up this Chinese company as their first contract. So it’s this kind of tactic. Why is the Senator calling the big utility in Nevada to get them to sign on a Chinese company to provide them energy? That’s the kind of — let’s say attention to detail, is one way to describe it — but also the kind of extortive practices that he employed.

He concluded, “This is the sort of way that Harry Reid operated in politics. He’s more feared than loved. Certainly his family loves him, but he used these kinds of tactics and was very effective at moving money around.”