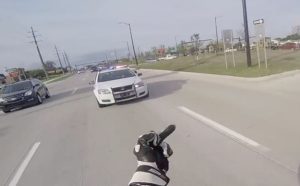 According to a federal appeals court, you have a Constitutional right, under the 1st Amendment, to give people, including the police, the middle finger. The case involves a woman who gave a cop the finger after he wrote her a ticket.

Officer Matthew Minard, pulled Debra Cruise-Gulyas over for speeding in 2017. The Officer reduced the ticket to a lesser charge. But as soon as the officer started driving away, Gulyas gave the officer the middle finger. Officer Minard pull her over again about 100 yards away and this time wrote up a new ticket for speeding. Gulyas sued Officer Minard alleging that he violated her civil rights by pulling her over the second time.

The Sixth Circuit of Appeals in Cincinnati ruled this week that stopping Gulyas the second time because of her gesture was a violation of her First Amendment rights. Federal Judge Jeffrey Sutton ruled “Fits of rudeness or lack of gratitude may violate the golden rule, but that doesn’t make them illegal or for that matter punishable or that matter ground for a seizure. Galyas hadn’t done anything illegal to prompt the second stop”.