SPIRIT OF SERVICE SECTION: CHERYL PRATER, THE POWER OF ONE

CHERYL PRATER,THE POWER OF ONE 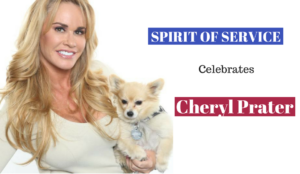 Cheryl Prater is far from the average wife of a Doctor lounging around and shopping endlessly. No, Cheryl Prater harnesses her boundless energy as she streams through the political landscape moving the dial where so many before have failed.

Last year, when the Las Vegas City Council voted to lift the ban on pet stores selling dogs from puppy mills, Cheryl Prater made every one of the City Council Members who voted for the ordinance wish they had never been born. Cheryl became the newly elected city council women Michele Fiore’s major pain in the ass that would not go away. Cheryl continues her fight to against puppy mills.

Did I mention Cheryl is one of Las Vegas’s top animal rescue advocates? Cheryl has placed so many rescue dogs that they named a wing at the SPCA after her (Actually they didn’t, but they should).

Cheryl was one of the first people in town to step out and support Donald Trump for President in 2015. She has been leading the Trump train in Nevada from day one and continues her support for the 45th President of the United States though her local political activism today.

From helping candidates running for office to leading local GOP committees, Cheryl has shown her ability to lead and build consensus, which is desperately needed in the Republican party today at the grass roots level.

Cheryl Prater does this and much more without any pay and without seeking fame and attention. And that’s why she deserves the recognition here as a shining example to all of us in this section of the Spirit of Service.