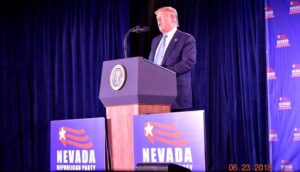 Trump tweeted out a promise to sue Sisolak and Nevada Democrats in court to block their midnight unconstitutional Special Session bill making Mail-in-Ballot elections and ballot harvesting legal in Nevada. And Trump will have lots of issues to bring to the table.

The bill, AB4, codifies mail-in-ballot elections and ballot harvesting. The bill literally extents election day by 2 weeks after November 3rd in order to count the mail in ballots votes. This provides partisans time to gather more votes to overcome any shortfall, giving the party in power the ability to steal the election.