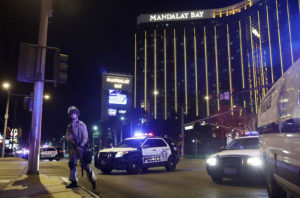 Last year on October 1, 2017, when a shooter perched on the 32nd floor of the Mandalay Bay Hotel starting shooting at concertgoers at the Route 91, LVMPD Swat teams never showed up. And only after the shooter killed some 58 people and injured over 600 more and 120 minutes later, did Metro officers finally entered the room.

Now MGM has decided to take their security into their own hands and they are deploying their own private Special Forces paramilitary team to protect their properties.

Bedwell said in response to MGM’s plan “I understand why a Strip property would feel the need for such an extraordinary step, but it is the wrong remedy for this problem,” Bedwell said. “Metro has ample resources to make the right changes to address the need for Strip safety using real police officers with real police authority and capabilities. This is not amateur hour. The people of Clark County must demand that public safety is left to full-time police officers, not security guards.”

Bedwell is a 20-year veteran of the United States Marine Corps. He has been in charge of security at U.S. Embassies in Madagascar, Jamaica, and Greece, protected nuclear weapons convoys and provided security for Presidents and official delegations overseas and in the United States. His military service, 22 years of civilian policing and a master’s degree in criminal justice make him uniquely qualified to repair the problems in Clark County public safety.

Sheriff Lombardo’s office refused to comment on the story.