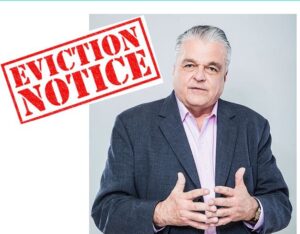 According to the National Multifamily Housing Council and a group of real estate data providers, nearly a third of all U.S. tenants failed to pay rent in April. This follows a log jam at the Nevada unemployment office website and while folks wait for their stimulus checks.

With folks laid off and waiting on their unemployment to be processes in the largest number of applicants in the history of Nevada, and Gov. Sisolak’s Emergency Order freezing evictions in force, a perfect storm has resulted in historic rent defaults this month.

The rent default rate is hitting REIT’s, Real Estate Investment Trusts, (Real Estate investment groups that trade like stocks and pay a dividend). And before you say who cares about those rich folks on Wall Street, many public employee pension funds are heavily invested in them and their losses may cost tax payers who are on the hook if they can’t pay retirees. One example of a hard hit REIT is Blue Rock Residential Growth REIT Inc, listed in December as one of the top 10 REIT’s to follow. On December 31, 2019 the REIT stock share price was at $12.05 per with an annual dividend of 5%. Today the REIT Share price is at $6.00 per share, cut in half.

Clark County has seen an explosion in growth and construction of Apartments over the last 5 years. Most of that money came from institutional investors. After the Governor’s decision to freeze evictions, even for people who still have their jobs or government checks rolling in investors will almost certainly pull back from any future investment s in Nevada.

Just ask folks living in California suffering with huge rents what happens when government tries to regulate landlords way too much. If people don’t build or invest while demand rises rents will go through the roof.

#1. The government does not have the power, nor the right, to take sides between two American citizens in a private contract #2 Government is supposed to be the neutral party who enforces contracts not takes side after the fact. #3. If government has the power to strip one person of their rights under a contract then government has no bounds.

Many folks who lost their jobs because of Sisolak’s policy shutting down everything were afraid they could not pay their rent. What else could Sisolak have done? The government’s only choices should have been either pay folks rent or provide temporary housing if they could pay. While protecting people from getting sick is critical, protecting people from government abuses is even more important.

Rents will most certainly go way up and so will security deposits; all because of Sisolak’s knee jerk eviction freeze policy.