MAYOR GOODMAN “SISOLAK HAS NO PLAN”

MAYOR GOODMAN “SISOLAK HAS NO PLAN” 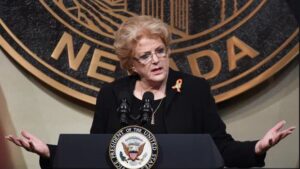 Mayor of Las Vegas, Carolyn Goodman, called Sisolak’s closure of nonessential businesses “total insanity.” At the city council meeting yesterday. Goodman said “this shutdown has become one of total insanity. …there is no backup of data as to why we are shutdown from the start. No plan in place how to move through the shutdown or how to even come out of it. Tragically, we have already lost, to this virus, 128 individuals in Nevada. But let me tell you, with a population of 3.2 million living in Nevada, those whom we have lost represent less than a half of one percent of our population, which has caused us to shut down our entire state and everything that makes Nevada unique.”

According to Worldometer, all seven states, except one state, that have not issued stay-at-home orders to fight an outbreak of COVID 19, are doing far better than Nevada when one looks at the raw data. We compare population, COVID19 total cases and total deaths for each state as of today. In fact, Nevada is doing much worse than all of them in terms of the number of dead compared to case loads.

BTW, Nevada is the only state on the list below restricting Doctors from prescribing hydroxychloroquine outside hospitals which may account for the sky high death toll in Nevada. So far, Nevada has more people who’ve died from COVID19 than all 7 states combined with no stay-at-home orders.  NV-120 vs. 107 ALL 7 states.

It’s appears that quarantining 3 million Nevadans is turning out out be a failed public policy.

STATES WITH NO STAY-AT-HOME ORDERS