Patrick (Pat) Anthony McCarran, lived 1876 to 1954, help build the modern day Nevada we see today. He was a true leader here in Nevada and the people in his day respected and elected him over and over to a host of different offices over some 50 years. McCarran was a JKF type anti-communist Democrat and stood for everything Harry Reid stands against. But McCarran’s many accomplishments, like building the Las Vegas Airport named after him, doesn’t count to Harry Reid types when you don’t tow the new Democratic Party line. Harry Reid has been conducting a campaign to steal the Las Vegas Airport name from McCarran over the last couple of years by slandering a great man who’s not around to defend himself. So we must defend him and defend our heritage. 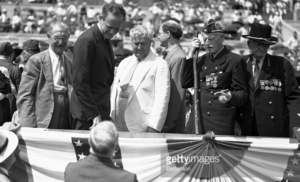 It is the last two laws that have Harry Reid and his supporters so upset. McCarran was an ardent anti-communist and believed in controlling our borders by limiting entry to those who had marketable skills, weren’t criminals and weren’t Anti-American in any way.

In September 1950, he was the chief sponsor of the McCarran Internal Security Act. This legislation required registration with the Attorney General of the American Communist Party and affiliated organizations and established the Subversive Activities Control Board to investigate possible Communist-action and Communist-front organizations so they could be required to register. Due to numerous hearings, delays and appeals, the act was never enforced, even with regard to the United States Communist Party itself, and the major provisions of the act were found to be unconstitutional in 1965 and 1967. [1]

The Act abolished racial restrictions found in United States immigration and naturalization statutes going back to the Naturalization Act of 1790. The 1952 Act retained a quota system for nationalities and regions. Eventually, the Act established a preference system which determined which ethnic groups were desirable immigrants and placed great importance on labor qualifications.

The Act defined three types of immigrants: immigrants with special skills or relatives of U.S. citizens who were exempt from quotas and who were to be admitted without restrictions; average immigrants whose numbers were not supposed to exceed 270,000 per year; and refugees.

The Act allowed the government to deport immigrants or naturalized citizens engaged in subversive activities and also allowed the barring of suspected subversives from entering the country. It was used to bar members and former members and “fellow travelers” of the Communist Party from entry into the United States, even those who had not been associated with the party for decades.

It expanded the definition of the “United States” for nationality purposes, which already included Puerto Rico and the Virgin Islands, to add Guam. Persons born in these territories on or after December 24, 1952 acquire U.S. citizenship at birth on the same terms as persons born in other parts of the United States

A 1962 guideline explained procedures under the Act:

U.S. Senator Pat McCarran certainly wasn’t politically correct by the Democrat’s standards of today. McCarran was an opponent of the New Deal and fought open border policies back then. He fought the communist threat within our nation, a threat, by any measure that has spread to every corner of our institutions today. From the classrooms to our Universities, to the Bernie Sanders Soviet style self-proclaimed new socialists who have taken over the Democratic Party of Nevada today.

In fact, President Trump’s immigration travel restrictions outlined in his first executive order was based on U.S. Senator Pat McCarran’s Immigration and Nationality Act of 1952, giving the President broad powers to limit people entering the US based on national origin and political beliefs. The principle that the United States gets to decide who to allow in and who not to, based on what’s best for the U.S. economically, socially and politically was established by U.S. Senator Pat McCarran. And that is why Harry Reid and the liberals want to banish him from the U.S. Capitol, steal his name from “McCarran Airport” and give it to Harry Reid.

To rename McCarran Airport after Harry Reid would be like renaming the Hoover Dam after Dina Titus or Lake Mead after Ruben Kihuen. It’s a form of grave robbing. The people of Nevada named the Airport after Pat McCarran because they valued his life’s work contributing to making Nevada and America great. Lets honor our heritage and the men and women who built our country and built Nevada.