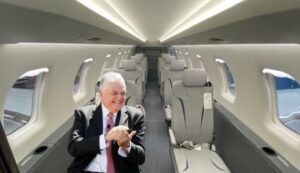 The purchases were approved in the State Legislature without any opposition. Gov. Sisolak’s NDOT Representative claimed to the Assembly transportation committee the new aircraft, a Pilatus PC-24, built in Switzerland, would saving taxpayer around millions in maintenance, enough to pay for the new planes and more.

360 did some research and found that the bulk of the projected savings from the PC-24 are fuels costs from the Williams International FJ44-4A. Its the Williams engines that deliver the bulk of the savings in terms of fuel and overhaul costs. But what the NDOT representative never mentioned was that Williams has a program to refit the State’s Citation II with new Williams engines for around $2 million vs. $10 million for the new PC-24 Jet.

Assemblyman Jim Wheeler was on the committee when the Sisolak’s folks presented the need for the new planes. Wheeler told 360 “If I knew we could have bought new engines and saved $8 million on a new plane I would never have supported the bill.”