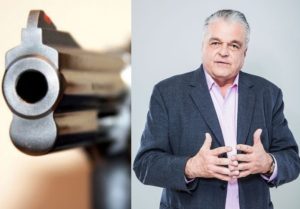 As bill draft requests start pouring into the Nevada legislature, Governor Elect Sisolak makes it clear he wants gun control. Steve Sisolak once had an A+ rating from the NRA. But ever since the primary election for governor, Sisolak has maintained his tough stance on gun control. Can Republicans hold the line on guns?

After a devastating defeat in the Nevada Assembly and a 1 vote short of a super majority in the State Senate, Nevada Democrats are set to turn on the fire hose and blast new legislation right thru to Governor Sisolak’s desk for his signature including radical gun control. The top of Sisolak’s list are banning bump stocks, so-called assault weapons and limiting magazine sizes. Even tho the Nevada Republican party has been fractured in recent years over taxes and other issues, the one issue that unites Republicans is guns and the preserving the 2nd Amendment.

Every state where these kind of gun control measures have been tried, crime has actually spiked. When the government bans something, whether it’s drugs or guns, it becomes more valuable. When Question 1, the background check law, was going through the election process in 2016, the number of guns stolen out of homes in Las Vegas spiked to over 3,000 according to Metro Police records.

Will over reaching NV Democrat’s impotent gun control trigger Republicans to unite and fight back? I predict yes.