SHUT UP AND PLAY 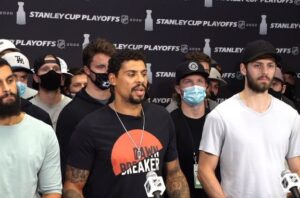 Why do these over paid, under educated performers think anyone cares what they think about political and social issues? Besides the fact that these multi-millionaires are actually arguing that the U.S. is unjust to Blacks. UMM you’re multi-millionaires.

When are these black athletes going to call on blacks not to kill other blacks? That’s the real crisis in their communities. Why didn’t they protest David Dorn’s death? David Dorn was a retired police captain who started a business in a black neighborhood. Dorn served his black community for 40 years. If you want to protest his senseless death, I’ll stand with you. Instead, they’re protesting because a thug violated a restraining order, stalked his ex-girl friend and had a warrant for sex assault. Jacob Blake failed to follow orders, went for a knife in his car and was shot.

So today, our Las Vegas Knights Hockey players are refusing to play Hockey over “Thug” Jacob Blake. Either shut up and play or resign and go help your community full time.