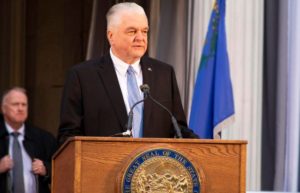 Yesterday Bernie Sanders spoke in Las Vegas for the third time this year as he fights for the Democrat Party’s nomination for President. And at least two Democrat Presidential Candidates have been stopping in ever week in Las Vegas and/or Nevada for the past few months. In 2014 and 2016 Obama and Hillary both made multiple stops in Nevada in the last days of the general Presidential elections. Gov. Sisolak understands better than anyone that Nevada is a swing state.

Gov. Sisolak has multiple agencies seeking special grants for funding for education, police, roads and infrastructure from the Federal Government. So he sees firsthand the benefits Nevada has received from hosting the first in the West Primary and a key swing state in national elections.

If the National Popular Vote Bill had passed, Nevada Democrats who have a voter turnout advantage in Presidential election years could see that evaporate. In addition, Democrats have a 100K voter advantage in Nevada currently, so Dems are not worried about Trump carrying Nevada. After all Candidate Trump lost Nevada in 2016 and Dems crushed Republicans in 2018.

360 spoke with a high ranking Democrat, who did not want be named, about Gov. Sisolak’s veto saying “Democrats believe Pres. Trump doesn’t have a chance to win Nevada so why give away our place on the national stage”.

So actually Nevada Republicans would have benefited from the bill but at the cost of giving away power at the national level. At the end of the day everyone in Politics does what’s in their own interest, and Steve Sisolak is the Democrat Governor of Nevada first and understands his power comes from Nevada voters, not California and New York voters.