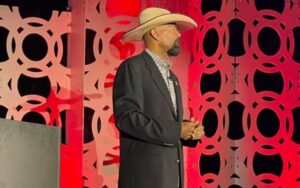 “Qanon is a far-right conspiracy theory and movement centered on false claims made by an anonymous individual or individuals, known by the name “Q”,that a cabal of Satanic, cannibalistic pedophiles operate a global child sex trafficking ring and conspired against former president Donald Trump during his term in office.”

When the Las Vegas Review Journal leftists cried out about the Republican speakers’ event at the Ahern this weekend, slanderously labeling it a “Qanon” event, I wonder if anyone from the RJ bothered to actual listen to the speakers. Speakers like Sheriff David Clark, who spoke about law enforcement issue across the country and the defund the police movement on the left.

Not one person at The Patriot Voice event spoke about conspiracy theories about global child sex trafficking accept the one on the U.S. border the RJ is ignoring.

The RJ attacked the event for spreading misinformation when speakers claimed there was voter fraud in the 202 election. But Nevada Sec of State Barbara Cegavske just filed charges against a man for mailing his dead wife’s ballot which was counted. BTW Nevada’s Democrat Attorney General Aaron Ford is prosecuting the case. 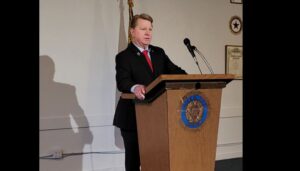 Jim Marchant, Candidate for for Nevada Secretary of State and a speaker at the Patriot Event responded to the RJ’s attacks:

“It is the mainstream media and communist/socialist cabals effort to discredit conservatives.”

The RJ’s attacks on the Pro-Trump event at the Ahern highlights how far left the RJ has gone since Sheldon Adelson passed away. Last year the RJ dropped conservative powerhouse Wayne Allyn Root as a columnist. The RJ just canned an Anti-semitic Reporter. The RJ has lost any notion of balanced reporting and has gone full leftist pro socialists. Perhaps that explains why the RJ’s readership is down so low they have to charge $1 per month to view their “news” online.