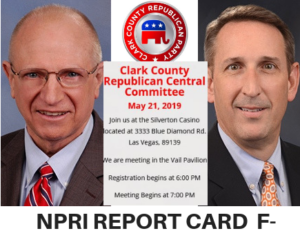 Nevada State Republican Senators Scott Hammond and Joe Hardy have voted for every major tax increase since they were in office including doubling the business license tax, fuel tax increases, sale tax increases and of course the biggest tax in Nevada history, Governor Sandoval’s $1.3 Billion Commerce tax which was supposed to “fix” education. Nevada Policy Institute rated every member of the state legislature based on their conservative voting records.

According to NPRI’s report card for 2015, the year the Republicans controlled both houses of the legislature and the Governor’s mansion, Sen. Scott Hammond received 46% or an “F” out of a possible 100% score. Sen Joe Hardy received a score of 38%. The number one ranked legislator was Assemblywoman Robin Titus who received a score of 93% and she was also number 1 for 2017.

But their rating was not only low because of votes for tax increases. Both Hardy and Hammond authored Senate Bill 303, which gave driver’s licenses to illegal aliens.

This year, even though now Democrats control all three branches of the government, thanks to RINO’s who screwed the voters in 2015, they still must peel off one Republican Senator to pass tax increases under the super majority rules. So the Republicans could literally shut down all new tax increases and show the voters they actually stand for something. But just when the Republicans had a winning political and policy issue of fighting increasing diesel fuel prices, not one but four Republicans Senators crossed over to vote for increase diesel fuel taxes.

This has created a huge rift in the Republican Party reminding voters of the betrayal of Governor Sandoval and Michael Roberson from 2015. Many of the party loyalist have come out forcefully defending the senators and their tax increases, claiming the rural counties want it. But in 2016, voters in the rural counties voted against raising diesel taxes, while Clark County voted for it. In fact “THE LYON COUNTY FUEL REVENUE INDEXING QUESTION” was rejected by 65% of the Lyon Count voters.

360 reached out to Nevada trucking companies and could not find one company who supported higher diesel fuel prices.