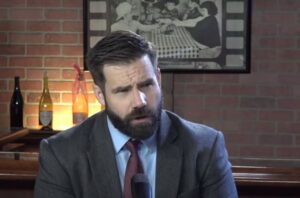 Multiple Liberal news outlets are quoting Gov. Steve Sisolak’s State of Nevada COVID-19 Response Director, Caleb Cage, who’s claiming folks are going to die because of Trump’s two rallies over the weekend in Minden and Henderson. And just like the rest of his CV19 leaderships staff MR. Caleb Cage has no medical license or degree for that matter, according to a search of the Nevada Medical Board of Examiners website.

MR. Cage was the Assistant Vice Chancellor for Workforce Development and Community Colleges at the Nevada System of Higher Education before being tapped by Gov. Sisolak to head the CV19 Response in Nevada.

MR. Cage is a career bureaucrat in Nevada who’s moving from one government agency to another.

MR. Cage isn’t the only person leading the Cv19 health response without a medical license. The Washoe County Health Director Kevin Dick also has no medical license either and in fact he went to Cornell for engineering.

Ihsan Azzam, Nevada’s top Health adviser to Gov. Sisolak also does not have a medical license.