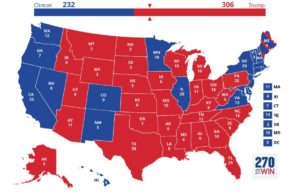 A little less than two weeks before Nevada Assemblyman Tyrone Thompson passed away, the Bill he sponsored for Nevada to join the National Popular Vote Interstate Compact was heard in the Senate Legislative Operations and Elections Committee. Assembly Bill 186 (AB186) would change Nevada’s Electoral College votes from being cast for the winner of the popular vote in the state to all six votes posting for the popular candidate across the United States.

Introduced on February 18, 2019, the Assembly voted for the Bill with four Democrats breaking party lines and designating a Nay along with the Republicans; however, the order was passed with 24 for, 16 against and two excused.

During the Committee hearing, Thompson articulated the details of the Bill and his reasoning for sponsoring AB186 explaining when he turned 18 he was “excited to make my vote count”.  He laid the foundation for the Bill and made his case for the positive aspects as well as elucidating the Committee as to what it would mean for Nevada and how the National Popular Vote Interstate Compact works.

If passed in the Senate, Nevada would join 14 other states and the District of Columbia in agreeing to give all of their Electoral Votes in Presidential Elections to the candidate with the most popular votes in order to determine the outcome of the election.  The National Popular Vote Interstate Compact would need enough states to join for a total of 270 votes in order to become a law; currently there are 189 without Nevada.

States who have passed the Compact

States who have proposed – but failed – Bills

There are enough pending Bills that, if passed, the Compact will represent 305 of the 538 Electoral Votes, more than enough for those votes to conclude the outcome of the elections.

Assemblyman Britney Miller gave a prosaic presentation at the hearing wherein she described the Electoral College to her class of 5th graders, opining how unfair the system is when deciding the position of the most important politician in our country.  Miller uses a pizza versus taco demonstration where three classes vote on whether they want pizza or tacos at a party; class 1 – 18 pizza, 17 tacos; class 2 – 13 pizza, 22 tacos; class 3 – 19 pizza, 16 taco.  As a result, the 5th graders can see two classes have chosen pizza over one class choosing tacos, but looking closer, the overall pizza vote was 50 while 55 voted for tacos.

The simplistic argument for popular vote over the Electoral College system negates the very ideals put in place by our Founding Fathers when they framed the US Constitution, Article 2, Section 1 and in the Twelfth Amendment.  While the Constitution never specifically mentions the term “Electoral College”, a process proposed by James Wilson and a compromise at the Constitutional Convention, the process of the election is put in place in Article 2; as with many other ideas by the Framers, it was difficult to predict every incident which might prove to upset the balance they were creating, the Twelfth Amendment addresses many of their concerns.

In the Federalist Papers, Alexander Hamilton wrote the Founding Fathers feared a tyrant could come to power by manipulating public opinion.  He wrote, “A small number of persons, selected by their fellow-citizens from the general mass, will be most likely to possess the information and discernment requisite to such complicated investigations. It was also peculiarly desirable to afford as little opportunity as possible to tumult and disorder.”

Senator Pickard, Nevada District 20 Republican, questioned whether the Compact would suppress or invalidate Nevadans’ votes when it came to a count of the popular vote when states with greater populations would essentially be making the choice for the entire country, rural or city. With California (55), Texas (38), Florida (29) and New York (29) comprising 28% of the nation’s Electoral Votes, smaller states such as Nevada (6), Wyoming (3) and Montana (3) would be all but forgotten in a Presidential Election (Electoral Votes in parenthesis).

Key points to remember about the Bill

*A state can withdraw from the Compact at any time

– If a state withdraws less than six months prior to an election, their Votes will still be counted towards the Compact and their withdraw will be effective at the next election

Committee on Legislative Operations and Elections 4/24/19