SCHOOL BOARD CANDIDATE JEFF PROFFITT “NO VAC, NO SCHOOL FOR YOU”

SCHOOL BOARD CANDIDATE JEFF PROFFITT “NO VAC, NO SCHOOL FOR YOU” 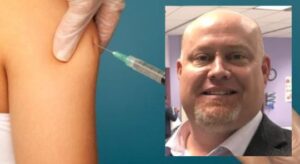 Jeff Proffitt, Candidate for Clark County School District B reminds many folks of the soup Nazi from the TV show Seinfeld, who famously said “No Soup for you”. But Proffitt isn’t serving up delicious soup. Proffitt is serving up mandatory vaccines for kids.

Proffitt supports requiring kids to take the CV19 vaccine or they would be banned from in class public schools here in Clark County. In a recent poll, a majority of Americans are deeply concerned about a vaccine rushed to market by, for profit, companies and approved by a politicized and compromised CDC.

Politics, not health and safety have driven the lock downs and mask requirements according to many parents we spoke with who are not ready to let their children be “test dummies for big Pharma”.

Proffitt is running against Katie Williams who wants to give parents the choice.

After the story came out, Jeff Proffitt now denies he supports mandatory vaccines. But his supporters like Micheal Roberson,  and liberal trade unions, school administrators’ unions, teachers’ unions are all in on mandatory Vac. Its not uncommon for politicians to reverse course once their policies get public push back.