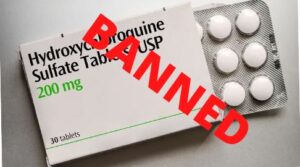 On March 31, 2020, 360 News Las Vegas served the Nevada State Board of Pharmacy with a Freedom of Information Act. letter requesting;

Nevada Pharmacies are still banned from providing the drugs today, unless the patient is admitted (not visiting an ER) admitted to hospital. Numerous doctors now believe the drugs needs to be available as early as possible, before folks end up in the ICU. Nevada Doctors have been completely left out of the process.

“No records responsive to this request are in the legal custody or control of the Board.”

360 News also asked for all email traffic related to the emergency order restricting doctors from prescribing hydrroxychloroquine. They asked for clarification, and responded with “ALL”. 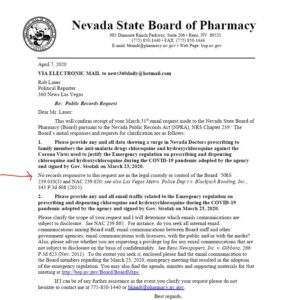 NV CD3 Candidate Mindy Robinson said “If there’s plenty of the drug in stock, and the FDA has already approved it’s use, then the only reason Sisolak would still be restricting this life saving drug…is because Trump had suggested it. As we’ve already witnessed with that sham impeachment and all the greedy pork they stuffed in that stimulus bill…the Democrats have ZERO problem making sure nursing their bruised egos comes first, over actually helping the American people.