Congressional Democrats sent out millions of emails to donors recently seeking to exploit the tragic shooting by a radical Islamic madman killing 49 people in a gay nightclub in Orlando Florida. The emails use an image of black Congressman John Lewis asking for $1 to “defeat these awful Republicans” and states “The time for silence is over”. The Congressional sit-in protesters ask supporters to “Stand with us”.

Nevada Democratic Nominee for US Senate, Catherine Cortez Masto, refused to criticize Congressional Democrats for exploiting the Orlando tragedy for fundraising. And she refuses to support Donald Trump’s refined proposal to restrict Muslims from ISIS held territories, who cannot be screened according to the FBI. Furthermore, Cortez Masto’s official campaign website fails to even mention Radical Muslim Extremists.

Democrats are seeking legislation to restrict American citizens whose names are on a secret Government no fly list from buying firearms, without due process . Republicans defeated the measure in the House and Senate recently. 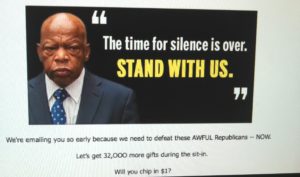