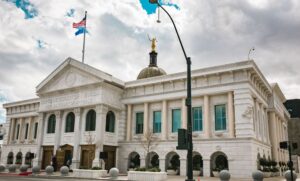 The Nevada Secretary of State, Barbara K. Cegavske, has decided to conduct June’s primary elections via mail-in ballots.  This is wrong on at least two levels…

1.)  The authority to order this is based on a VERY liberal reading of an obscure provision in state law that allows counties to request that certain precincts be designated “mail-in” due their small size.

That law was NEVER intended to be used to justify mail-in balloting in EVERY precinct in the county.

2.)  Completely changing the entire electoral system in our state should not be made by one individual.  A decision of this magnitude should be authorized only by the 63 elected members of the Legislature with the concurrence of the governor.

As reported by Breitbart:

The grassroots election integrity group True the Vote is suing Nevada on behalf of registered voters in the state over Secretary of State Barbara Cegavske’s plan to impose universal mail-in voting for the state’s June 9 primary election.

True the Vote is asking for a “declaratory and injunctive relief to halt the secretary of state’s imposition of an ‘universal mail-in election,’” contending that her action violates both the state’s and country’s constitution and would lead to “widespread election fraud.”

Cegavske announced changes to the election in March, detailing in a press release that all active registered voters in Nevada will be mailed an absentee ballot.

“No action or steps, such as submitting an absentee ballot request application, will be required by individual voters in order to receive a ballot in the mail,” she wrote, citing coronavirus-related concerns.

“Because of the many uncertainties surrounding the COVID-19 pandemic, as well as the immediate need to begin preparations for the 2020 primary election, it became necessary for me to take action regarding how the election will be conducted,” Cegavske stated.

“Based on extensive conversations with Nevada’s 17 county election officials, we have jointly determined that the best option for the primary election is to conduct an all-mail election,” she added.

Democrats took their calls a step further, “suing to force Secretary Cegavske to mail ballots to every name in the voter registry, not just active registrations” as they seek to “weaken current state rules that invalidate ballots because of mismatched signatures and prohibit vote harvesting,” according to True the Vote.

True the Vote contends that universal mail-in voting violates the rights of U.S. citizens because it, according to the press release:

The lawsuit comes on the heels of a victory in New Mexico, where the GOP defeated the left’s aggressive push for statewide mail-in voting.

“Three weeks ago, we prevailed with the New Mexico Supreme Court to stop an unconstitutional scheme that would have imposed universal mail-in voting from the bench,” True the Vote President Catherine Engelbrecht said in a statement.

Today we are in federal court to defend the rights of Nevada voters. These are just two of many states that are being used in a well-orchestrated globalist scheme to intentionally destabilize state run election processes, giving free-range to fraud in ways that will remain long after the fog of COVID has lifted. This is a blatant attempt to silence the voice of the American voter by destroying the processes that keep elections free and fair.

“We’re asking all American voters to stand with us in defense of voters’ rights. Make no mistake, if we do not act now to preserve our liberties, they will be taken from us,” Engelbrecht warned.

The lawsuit comes as Democrats collectively use the unconventional circumstances surrounding the coronavirus pandemic as a means to establish mail-in voting across the country. It remains a long-desired progressive agenda item that critics say is part of the Democrat Party’s broader scheme to overhaul the way the U.S. conducts elections and to, eventually, turn red states blue by loosening voter restrictions across the board.