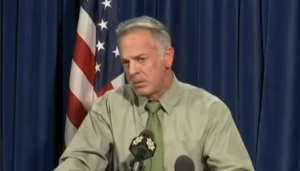 Several news organizations have filed lawsuits urging officials to release more information about the Las Vegas shooting, claiming they are violating public records law by keeping many of the details a secret.

The Las Vegas Metropolitan Police Department and the FBI have been tight-lipped in recent weeks amid a mounting outcry from the public for more information on the deadliest mass shooting in modern U.S. history.

“A full month later, significant questions remain unanswered about the shooter’s actions and the response of public agencies,” the lawsuit says, according to the Los Angeles Times. Authorities’ “blanket refusal to produce any of the records pursuant to the requests is improper, and all requested information and records should be produced without redactions.”

“Under Nevada law, all video and audio recordings made by police-worn body cameras are public records subject to inspection,” in addition to 911 call recordings, the lawsuit says.

The second lawsuit asks a judge to unseal records related to more than a dozen search warrants filed in connection to the investigation of shooter Stephen Paddock, the Los Angeles Times reported.

The media outlets behind the lawsuits, represented by the Ballard Spahr law firm in Las Vegas, include the Los Angeles Times, the Associated Press, ABC News, Washington Post, and KSNV-TV, a local Las Vegas news station, among others.

The Los Angeles times reported that Las Vegas Police have denied requests from media to release the records, saying the investigation is ongoing, while ignoring other requests outright.

“The law enforcement authorities in charge of the criminal investigation have publicly declared that the shooter, Stephen Paddock, acted alone,” one of the lawsuits says. “Although aspects of that investigation are still ongoing, law enforcement officials cannot credibly claim that a search for further suspects — the primary reason why investigations are kept confidential — will be harmed if these records are unsealed.”

Las Vegas police did not respond to a request for comment from the Los Angeles Times Wednesday night.

Sheriff Joseph Lombardo and Aaron Rouse, FBI Las Vegas’ special agent in charge – who used to appear in front of the media in daily briefings in the days after the attack – held their last one on Oct. 13, nearly three weeks ago. Since then, they have mainly stayed away from media appearances, only speaking to a select few outlets this week.