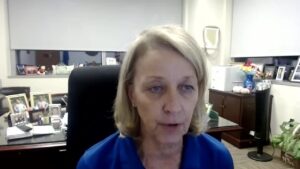 Nevada Secretary of State, Barbara Cegasvke, was the keynote speaker yesterday at the Spring Mountain Republican Women’s Luncheon where the attendees grilled her regarding voter fraud and the Dominion election systems. Cegasvke dodged a live in person speech and instead appeared via zoom with her Deputy. Several times during the questions and answers portion her zoom system had technical difficulties that required her to turn to her Deputy to answer questions. 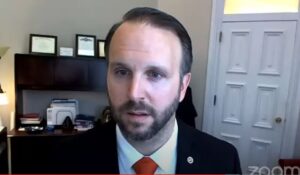 However less than two weeks ago, just down the street from Cegasvke’s office in the Carson City Court House, the Trump campaign submitted some twenty books of evidence including the names and addresses of:

15,000 voters registered in a commercial or vacant lot

But Cegasvke didn’t bother to attend the hearing. Yesterday Cegasvke told the group that her “office has seven criminal investigators and if anyone brings me evidence of a crime we will investigate it.” She then claimed to have no authority to investigate Joe Gloria nor any voter fraud in Clark County.

360 reached out to the NV GOP leadership and spoke with Jesse Law, who is one of several Trump Electors that sued Nevada to overturn the election results. Jesse Law called Cegasvke a liar stating his team “sent her numerous documents and requests to investigate voter fraud in Nevada. In fact she was named in one the lawsuits by the Trump Campaign and State GOP. So for her to claim she’s never received evidence of voter fraud is a lie.” At yesterday’s luncheon a NVGOP member tried, unsuccessfully, to serve Cegasvke with dozens of affidavits from voter fraud eye witnesses, but she brushed them off.

Cegasvke went further on to claim that Dominion Software is a great system and that all the stories about Dominion are fake news.

Most of the women in attendance were shocked by Cegasvke’s answers and her refusal to investigate Nevada voter fraud allegations.