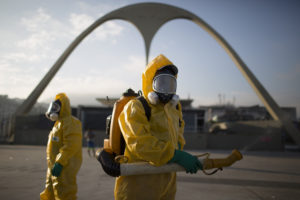 After the first official case of Zika appeared in Nevada this week, authorities are seriously considering spraying neighborhoods. This week a pregnant woman in Washoe County was diagnosed with Zika, according to Washoe Health officials.

Clark County officials are considering spraying neighborhoods using aerial disbursement techniques.   Zika has been report in Florida and Texas over the past month as it spreads from outbreaks in South America. The Obama Administration allowed infected people into the US.

The Zika virus has been linked to severe birth defects, including microcephaly, since it surfaced in Brazil about a year ago.