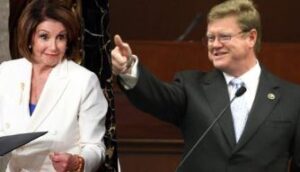 Wanna Be Governor Nevada Republican who’s voted over 65% of the time with Nancy Pelosi voted again today for her $900 million CV19 bill. The bill will provide some citizens $600 with most of the money going to foreign countries and the green new deal.

WASHINGTON, D.C. – Congressman Mark Amodei (NV-02) today released the following statement after voting in favor of a bipartisan-bicameral omnibus appropriations bill to fund the government through the end of the Fiscal Year and a $900 billion COVID relief package:

“Although long overdue, the passage of today’s bills is certainly welcome news for the millions of Americans and small businesses who have suffered for months due to congressional inaction and intentional efforts by the House majority to block relief funding.

“If you’re also disappointed in the timing of these response efforts, it’s worth noting that a number of the priorities included in today’s COVID relief package are extremely similar, if not identical, to those proposed by Republicans over the last several months. Unfortunately, Speaker Pelosi blocked all of those proposals, and even recently admitted she did so for political purposes as she had no intention of negotiating until after the November election.

“Essentially, the Speaker went from her $3.3 trillion wish list of partisan priorities, to rejecting Secretary Mnuchin’s $1.8 trillion offer just two months ago. As such, it’s still incredibly unclear what the Democrats hoped to achieve with their strategy of holding up aid for families, hospitals, workers, and small businesses, while also delaying funding for vaccine procurement and distribution.

“In the meantime, Republicans remained focused on providing targeted relief to small businesses, making vaccines available, and safely reopening our economy – and this package delivers on all of those fronts by providing approximately $900 billion in funding to extend the Paycheck Protection Program (PPP), add deductibility for PPP expenses, support the purchase and distribution of vaccines, provide direct payments to individuals, and extend the unemployment programs created under the CARES Act. Additionally, this legislation provides appropriate levels of funding needed to support childcare centers, substance abuse programs, schools and universities, rental assistance, transportation initiatives, supplemental nutrition assistance programs, and our nation’s farmers and ranchers.

“While we’re definitely on the road to recovery, our nation will continue to face an unprecedented set of challenges as we head into the 117th Congress, and I certainly hope to see better leadership on behalf of the American people in the New Year. It’s simply unacceptable for the Speaker of the House to only choose to come to the negotiating table during the eleventh hour, especially when the solutions have been out there for months and we clearly know what needs to be done to get them across the finish line. The American people deserve better, and I urge the majority in the House to put the political posturing behind us and rise to the occasion in 2021.”