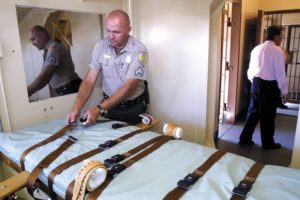 Two time killer, Scott Dozier has been requesting to die for the past year waiving all his appeals. Not one convict has been executed in over a decade in Nevada.Nevada’s last prisoner executed was Daryl Mack, by lethal injection, on April 26, 2006. Mack was executed for the rape and murder of Betty Jane May, in 1988.

Dozier is a brutal murderer convicted in 2005 of killing two people and chopping up their bodies. Miller’s body was found in April 2002, killed by Dozier. Miller’s body was cut into pieces and stuff into a suitcase. His head, arms, and legs were never found.

Even though Dozier was convicted and sentenced to death by a jury, and even though he has dropped all his appeals, the ACLU still stepped into fight Dozier’s efforts to be executed claiming the State lacks a proven and legally approved lethal legal drug cocktail. But according to law enforcement sources, the State of Nevada may turn to Texas and use their proven drug cocktail and maybe acquire lethal drugs from private small drug compound pharmacies.

Under Nevada law, the state must disclose the exact drug cocktail they intend to use at least one week prior to Dozier’s execution.

The issue the Nevada Department of Corrections must address, according to public reports:

Assistant Nevada Attorney General Wes Duncan is expected to announce he is running to replace Adam Laxalt for NV Attorney General and he is likely to face Senator Aaron Ford who opposes the death penalty. So the death penalty may be a major issue in this race as this case works its way through our broken court system. Broken because Dozier wishes to accept the jury’s sentence but the legal system he was convicted under continues to obstruct its own court order to put him to death.

Only in liberal modern America does the court allow an outside third party like the ACLU to stop the execution of brutal killer who has waived all his appeals and wishes to die.

There are currently 83 prisoners on death row in Nevada. Edward Wilson has been sitting on death row the longest, since 1980.

The state just last year finished building a new death penalty chamber at a cost of $860,000.