June 8, 2016
Last September 2015, the Clark County Commission voted 6 to 1 in favor of increasing sales tax for the express purpose of hiring more cops.
Commissioner Chris Giunchigliani was the only no vote, while newly sworn in County Commissioner Marilyn Kirkpatrick, recently appointed by Gov. Sandoval, voted for the tax increase.

The new tax added .05% to the county sales tax, projected to generate more than $19 million dollars, to hire 133 new Metro Police officers in 2016.

In addition, the money funded more cops in the cities of Henderson and North Las Vegas.

But under Sandoval’s Sanctuary City rules of catch and release of illegal aliens, Metro Police is struggling to keep up with a huge increase of crime, reporting an 88% increase in homicides, and a 50% increase in violent crimes, for certain parts of town in the first half of 2016.

Now, the Clark County Commission is considering round two of tax increases for more cops. 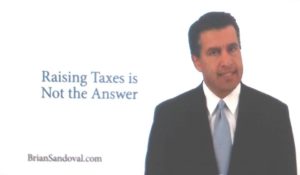 Governor Sandoval pushed hard for driver’s licenses for illegal aliens, as part of his support for President Obama’s sanctuary city and amnesty policies.

Sandoval refused to support legislation to change the policy in 2015, when the republicans controlled both the Assembly and Senate. Sandoval spoke in 2012 at the La Raza annual national convention, which means “The Race”, supporting Sanctuary cities and amnesty for illegal aliens.

According to a 20 year long comprehensive study published in 2009, that was conducted by the Federation for American Immigration Reform, a Washington D.C think tank, illegal aliens account for more than 8% of the total population of Nevada.That was 8 years ago.

According to a Zogby poll, over 76% of Nevadans believe illegal aliens have a very negative or somewhat negative impact on the State Budget.